Looking for the reincarnation of Bub-Woon

Banya is the ninetailed fox who has been sealed in a Scroll for a little over a thousand years. He claims to be 1,050 years old.

Banya has long white hair, extending to about the center of his back. His eyes are red and sharp. He is always shown wearing a light blue shirt and trousers, and white shoes. Many characters have considered him to be very attractive.

His most noticeable characteristics are his fury tails that stick out from his rear, being nine in number and also white in color.

Banya is a very old fox, therefore he has seen much of human behavior, and hasn't shown much appreciation or respect towards them, except for So-Yoon. One of his most noticeable traits is his bad temper, as he is quick to anger and hard to reason on most occasions. He is capable of becoming serious and calm, but is still prone to lashing out, especially when it comes to Koko, which he calls "Meatball".

Banya as a young child was told by his mother (who was the late clan leader) to become a god, and not fall for humans like she did. One day when going to see his mother, he saw his mother dead on the floor of the shrine along with some monks, where he saw Bub-Woon eat his mother's orb. (It is assumed that Banya's Mother loved Bub-Woon after Banya's Father became a god.)

Three months later he is seen eating the hearts and livers of people who go up to the mountains it is also seen he has also grown a lot in three months. There he is spotted by Bub-Woon who comments on how much he has grown, and Banya gets mad and attacks Bub-Woon.

Banya was sealed into a Scroll, and could only come out when a descendant blessed with a spiritual gift is born. His duty is to protect that descendant in order to become a full-fedged medium.

Apparently, Banya uses this opportunity to find a certain human, and by doing so, he can finally leave the Scroll. However, should the descendant he's protecting choose to become a medium, that chance will be lost, and he will be forced to wait another thousand years. This is said to be due to a contract made between the gods and the Medium who possesses his orb, which Koko is revealed to have since he's the Scroll's Contractor, and he is unable to retrieve it until he is released.

Banya has stated that all the people he has served before, have always been greedy, though Lee So-Yeon and Lee So-Yoon were/are the exception(s), which is why he has also stated that he 'wants' to protect her (Lee So-Yoon).

Beginning at an unknown point, Banya was in charge of protecting Lee So-Yeon, who, out of sympathy for him, refused to become a Medium and was the first one to do so. She later secretly went up the mountain, where she gave birth and died, and Banya is said to feel regret for not being able to save her.

He later became in charge of So-Yeon's daughter, So-Yoon, who while performing a ritual, got into an accident, as stated by Banya himself. He later discovers that the other child in the accident was Chae-Rim.

Lee So-Yoon - Banya has known Lee So-Yoon since she was a baby, and had promised her mother that he would protect her. It is shown that Lee So-Yoon bears romantic feelings towards Banya. She later confesses to him, but since the mouse Goong-Bi once did this while disguised as her, Banya initially assumed it wasn't So-Yoon. Banya however, rejects her and this puts a strain on their relationship. They do however end up kissing, much to their embarrassment of both. When their relationship is strained again, Banya works to reconcile with Son-Yoon by finding the pieces of her rosary. By Chapter 58, the pair kiss again. Notably, Banya is highly protective of So-Yoon, and is easily jealous when a guy (or a fox) starts flirting with her. He often blushes whenever he is in an awkward situation with her too.

Lee So-Yeon - Not much is known about their relationship but it is said Banya cared for Lee So-Yeon since she was the first descendant to refuse getting a god. He even went to visit her to make sure she was okay while she was pregnant. Banya's passion to protect So-Yoon stems from his promise to do so to So-Yeon. Banya was upset that So-Yeon died, and stated that even at the cost of the god's wrath, he still wanted to protect her with his own hands.

Fox Elders - As a child, the Fox Elders often came to him asking about Bub-Woon. The White Elder in particular, was shown to be very vicious towards Banya, who was a child at the time.

Bub-Woon - As a child, Banya adored Bub-Woon with all his heart, as he was the father he never had. All this changed when Banya saw Bub-Woon hovering over the corpse of his mother, and taking his mother's orb. Banya swore revenge. It did not make matters better when Bub-Woon himself claimed to have killed Hwa-Yeon. Bub-Woon was the one to seal Banya away inside a Scroll. Even after one thousand years, Banya still wanted to kill him, even if it meant killing a baby and staying stuck in the Scroll for another thousand years. 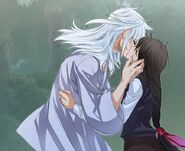 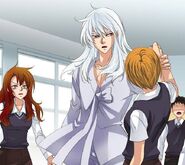 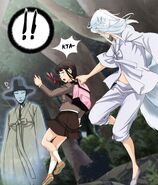 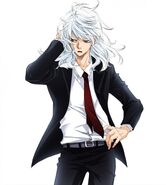 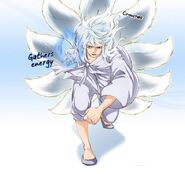 Add a photo to this gallery
Retrieved from "https://a-thousand-years-ninetails.fandom.com/wiki/Banya?oldid=4764"
Community content is available under CC-BY-SA unless otherwise noted.